Notes
So, I started obsessing about noiseboxes last summer, and the first source I found was Bugbrand, and I was lucky enough to pick up a Bugbrand Weevil '08 straight away from ebay (I've never seen one since!), so I've always kept my eye on Tom's handiwork. I thought for a while my first project would be one of his WOMs (Workshop Oscillating Machines). It didn't come to pass, but I follow Bugbrand developments keenly, tho the majority of Tom's focus is modular these days, he does still come up with one or two discrete bits of kit.

Just as I started going on this, Tom posted a little thing on his blog, "String Thing DIY" - a little box, with guitar strings attached to a piezo disc to make noise. Lovely. Got the components together and did nothing about it until now...

All in all, excluding drying time, this project took about 30 minutes to do. I don't think there will be another quicker. The hardest part was extracting the piezo disc from the plastic shell it came with. I tooled the first one, but the second popped out much more easily. As per the instructions, I heated the shiny side of the piezo disc, and blobbed solder down, and gradually added the six inch lengths of various gauges of guitar string (cheapest set I could find, of electric 9's) into the blob. I double checked the tip/sleeve connections for mono jacks(something I haven't quite got stuck in my head, until now), and it was done.

Well, I say it was done, but I didn't reckon on my impatience with fixing the piezo disc onto the box. Araldite is not a quick fix. In fact, it clearly tells you on the packet that it's moveable for 2 hours, and takes up to 24 hours to dry solid. I ignored this, and pulled it about, managing to separate the disc from the housing, and pull a couple of strings out. I put it to one side, and waited until morning...

I was still impatient to have a play with it, so used superglue this time, and soldered a couple of replacement strings into the mix. Done.

First test was a quick one - played through an EQ pedal and a TC Electronics Flashback delay. Really like the noises this generates, and it plays very nicely with the delay. The test piece includes one track with a reverse delay, and another with a modulated one.

This will be the quickest fix I get this year I think, but a lot of fun to build and play. I might make more of these... 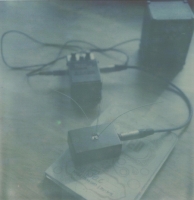