Notes
Whilst continuing to work on the Weird Sound Generator, I did a 20 minute(ish) piece from my Nic Collins bible - built a little waterproof contact mic.

Assembling was easy enough, tho I discovered quite early on the cable I had wasn't ideal - too thick, and too microphonic... but this is all about learning through doing, so I ploughed on, Firstly, I trimmed the cable back to expose the wires at either end, then used crocodile clips to test the concept of attaching the piezo disc at one end to the jack at the other. having never used a piezo mic before, I was initially disappointed it wouldn't pic up my voice, but I got a reaction if I flicked it with a finger (!).

Stripping the wire back, the shielding was used for grounding the mic, and make for a mighty thick 'wire' to attach to the jack, so I ended up with quite a lot of solder going on, but the disc and the jack stayed fast, so onto stage 2...

...Waterproofing! not the first thing that would have sprung to mind, but Nic's suggested experiments included recording the freezing of the mic into an ice cube, and then again as it defrosted - this necessitated something of hunt. I discovered none of the half dozen hardware shops in central London had heard of PlastiDip or latex paint as suggested in the book, so I had to revert to the trusty old internet. It's not cheap - I bought a pot of clear PlastiDip through Amazon (well, PlastiDip sell direct via Amazon UK), which I'm pretty sure will be a lifetime supply for about £11. To waterproof the mic, I did a couple of dips of the piezo disc into the pot, over the end of the audio cable, which took 2 minutes to dip, and about 4 hours to dry out. As per the warning, it smells a little funky.

My first attempt at ice-cube-mic making failed as the mic slipped out of it's compartment, but the second was better - secured the mic in the ice cube tray with a mini-clamp, and left it for the weekend. On my return, the mic was indeed frozen in place. I cracked open a can of tonic water, attached the mic to a minidisc, and recorded away. Through headphones, it sounded amazing! Sadly, the minidisc recording is a bit painfully noisy, so may have to invest in a solid state recorder for further experiments. 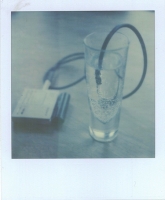