Notes
One of the sounds that I love since digging into electronic synthesis is the thwump of the low pass gate... created in the ‘west coast’ of the syntheziser world, there are more than a few choice of readymade modules out there, but for some reason, I decided it would be more fun to make my own.

Over on MuffWiggler, where synthy types chew fat, I saw on more than a few mentions of the Thomas White Resonant Low Pass Gate (TWRLPG). Sanctioned by Don Buchla, this looked the bomb, and had the added benefit that someone else had knocked up a very tasty panel for mounting this into my system.

I picked up revision 3.2 of the board; started assembling components. Much of it already in stock, but there were a few new ones compared to my previous projects. In particular, 1% metal film resistors, greater use of electrolytic caps, and the addition of vactrols…

Vactrols are talked about in hushed whispers, modules becoming exponentially more attractive in line with the number of vactrols hidden behind the front panel of a module. Technically, they are:

“an analog optoisolator consists of an LED and a light-dependent resistor (LDR) in the same package: light output from the LED varies as the current passing through it; the light strikes the LDR, varying its resistance in turn; in effect this gives a current-controlled resistor.”
MuffWiggler wiki

To me, they are a new black sweetie, with a funny reference number and a (relatively) sizeable pricetag. They were also tricky to find – the TWRLPG build notes recommend either ‘slow or fast vactrols depending on taste, and you can use single or duals. I plumped for a selection of single and dual slow vactrols, as the only source I could find (Farnells – free shipping over £20 per order) only had the slows. Which was fine – that’s probably what I wanted any way.
I also needed some connectors for hooking up the boards to the modular power supply – lovely service from Erthenvar , who supplied five cables for less than a tenner (inl. international postage). The cables needed adaptors to link them onto the board – I discovered, and ordered in error, parts for connecting a completely different format (MOTM rather than Eurorack). Erthenvar helped with that too.

I acquired the other parts for this from Bitsbox, as usual, but also from Spiratronics, who I don’t know if they were around before, but supplied some stuff that wasn’t on the front end of the Bitsbox shop, including the very cute Wiwa electrolytic capacitors, and still with very cheap postage.

I felt pretty cocky assembling this one. The project required two boards; the first seemed to go together more quickly than previous attempted. I definitely seemed to be better with the soldering iron than previously, and was getting the flow better, and less trouble with the tip getting dirty. I was also doing what you get told to do – clean, tin, solder, clean, tin – a lot more than I did in the past.

On the Gristlizer project, I stumbled at wiring up the SPDT bypass switch – it seemed too small, and I couldn’t get it hot enough to solder flying wires too. The switch on these boards is a 3PDT. So it shifts from filter to VCA with a stop in the middle for both was a breeze.

Problems started on powering the first board. Nothing. I got no noise at all. I had missed a resistor during the over-confident assembly. Plus, I had missed two sets of jumpers. The jack sockets were tricky – the audio input only working when the cable was half. Unlike the excellent wiring diagram that you get with the MFOS WSG, this project assumes you know a little more about what you’re doing. Thankfully, I found lots advice from others who have built this on MuffWiggler. Eventually I worked out what to do - took a while though. The first board made some noise – I was so pleased to hear the Offset work on this, and - in a good way - the resonance was very spikey.

I rushed the second board, assembling in three hours what had taken ten for the first. There was a modular meet in Brighton, and I wanted to be ready for comparison with others. Sadly, all I had was a rats nest in a box to take with me. Why? Same as the first board – I had missed a component, a capacitor this time.

I still had trouble though, after the event, and went back to resolder all the joins that looked potentially dodgy. Still no noise. Finally, I decided that the dual vactrol I used on the 2nd board may be the problem. I butchered it off - turned out to be the longest single job in the whole build - and put in two singles. Again, I had a pot mis-wired (the Audio out this time), but both boards were powering up and making noise.

UPDATE
A couple of months, and a couple of modules on, I came back to the TWDRLPG. As I said the second board didn't seem to sound right, but I was was a bit scared I'd fundamentally cocked something up. That said, I still wanted to get the washers on to make a neater fit, so I unhooked the board (scribbling with a Sharpie on the jack sockets so they went back to the right place first time on remounting the module). An examination of the two boards revealed no obvious discrepancies, but looking at the switch did: I mapped out where the wires went on the 'working' board, and then did the same on the 'not working' one. Turned out my problem had been elementary - I had swapped the wires on two of the switch lugs in my haste. A quick swap to the right place, and all was good. Remounted the board, with the washers on the pots... and realised I'd forgotten to fix the second CV attenuator - argh!! I'll fix that one later... 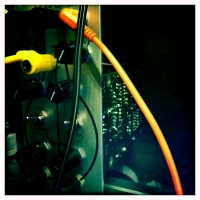 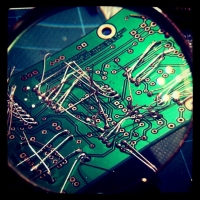 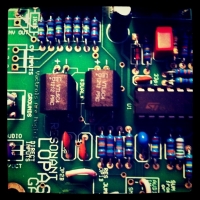 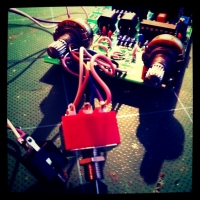